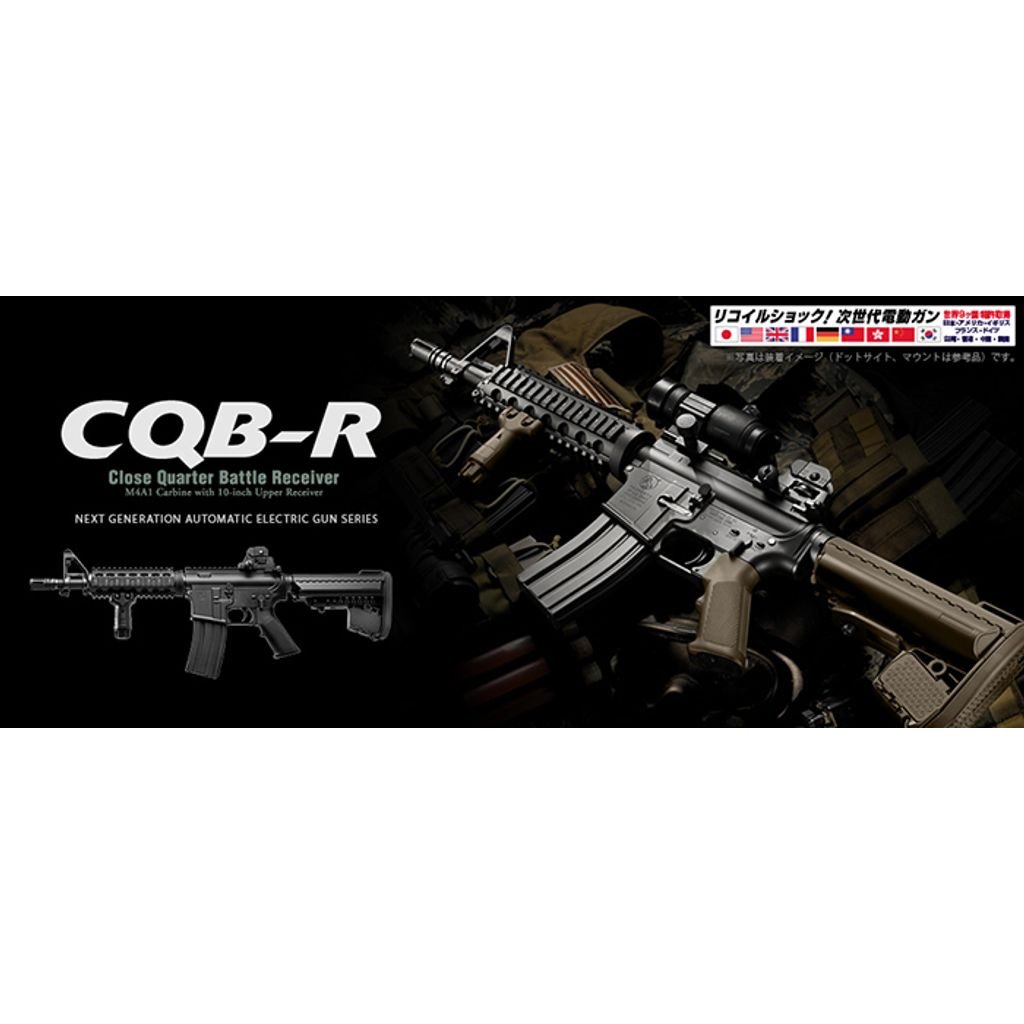 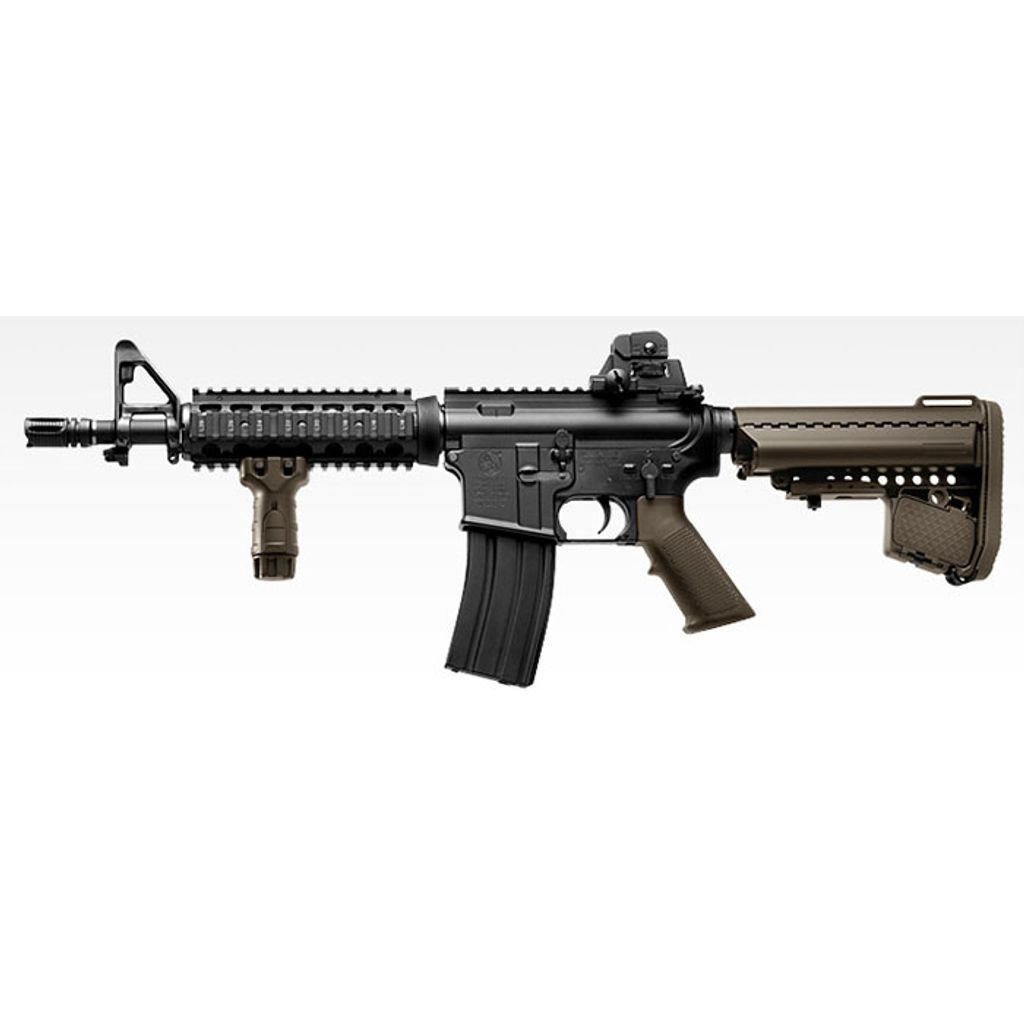 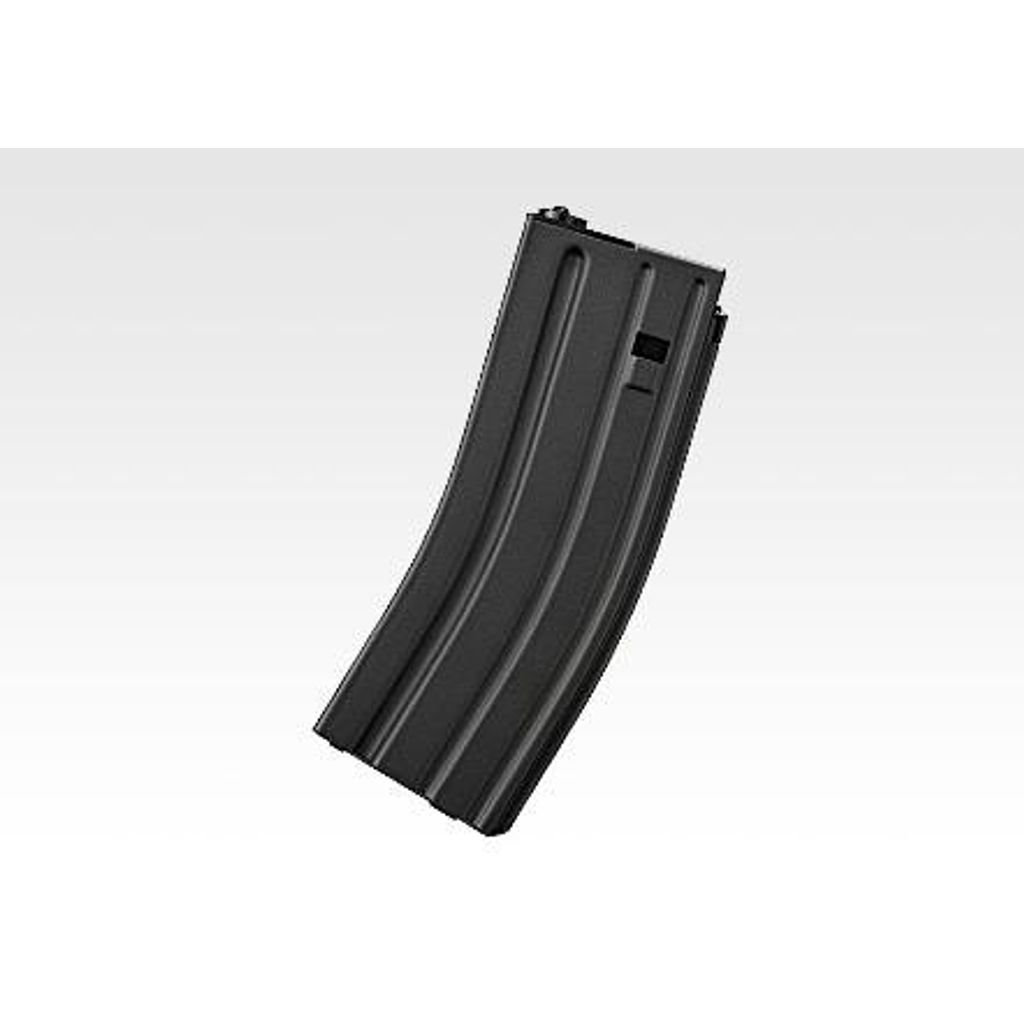 A new era of M4 Shorty that evolves flexibly

(detail)
The development of a carbine model with better handling than an assault rifle was promoted at the request of the US Navy Special Forces SEALs (Shields), who were often in charge of guarding VIPs and operations in narrow rooms.
That's how the CQB-R, which replaces the upper receiver with the barrel and makes the M4A1 a short model, was born.
A model that cuts the barrel length to 10.3 inches for CQB (= close combat) and adopts a rear sight that assumes the installation of a dot sight is completely reproduced with the next generation electric gun.
The good handling that the real thing has also improves the practicality of the airsoft gun.

"Major features"
■ Shoot & Recoil Engine Equipped: By pulling the trigger, the bolt will operate at the same time as the shot is fired, and the strong recoil generated inside the main body will be transmitted to the whole body. In addition, it adopts an auto-stop system that stops the firing operation when the magazine is empty. It is a model that pursues the reality of operation and operability.
■ Equipped with metal R.A.S.: Handguard Equipped with R.A.S. The rail part is printed with the same numbering as the real thing.
■Volter type stock: Adopts a stock that can adjust the length of the stock to 6 levels. A specially designed SOPMOD battery is stored in the stock.
■Two colors: Black with a professional atmosphere, and two colors of flat and dark earth that demonstrate a camouflage effect in the desert area are available.
■ Realizes outstanding rigidity: In addition to R.A.S., metal materials are used for various parts such as the receiver, outer barrel, and buffer tube. With a total length of 705mm, it is easy to handle, and it has a reliable rigidity for gaming use.
■Adjustable front/rear sight: The top and bottom of the front sight can be adjusted with the included adjustment tool. In addition, the rear sight can be finely adjusted by dial operation up and down and left and right respectively.
■Compatible with various muzzle options: If you remove the muzzle compensator, you can install a muzzle option with a 14mm reverse screw specification such as a silencer.
■Steel press magazine: Comes with a magazine with 82 bullets and a steel press outer case similar to the real thing. * The magazine is not compatible with the electric gun standard type.

[Story/real gun background]
The Colt M4A1 Carbine was developed as a model exclusively for the US Army Special Forces.
Due to its outstanding performance in CQB (= Close Combat), in recent years it has been supplied in large quantities to soldiers belonging to the Airborne Division and Marine Corps, etc., and has grown rapidly into an automatic rifle representing the US military.
In the latter half of the 1990s, Knights' R.I.S. (= Rail Interface System) appeared, which mounted rails on four sides of the handguard.
With this in mind, new models such as optical equipment, silencers, and flashlights have been introduced one after another.
In addition, a grenade launcher that can be attached to the barrel is also available, and by selecting and installing these accessories for each operation, it is possible to respond to various situations without changing the base gun.
Since the M4A1 has been active in Afghanistan and Iraq, the "Modular Weapon System", which attaches various optional parts based on a small and lightweight carbine with rails, has been adopted in various countries.
The M4A1, which succeeded in the systematic use of military guns, left a great achievement in the history of guns.